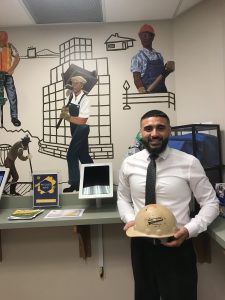 Esteban Vera Jr. will never forget the night that John “Jay” Johnson, a well-liked member of Laborers’ Local 57, fell to his death in January 2016.

“Johnson was on the night shift,” recalled Vera, Local 57’s business manager, as he sat in his office in Philadelphia, his own well-worn hard-hat in a place of honor on a bookshelf behind him.

Johnson, a father of three, worked with a crew on Pier 78 in South Philadelphia. He fell through an uncovered hole in the decking into the water below and drowned. Divers found his body hours later, after co-workers spotted his hard hat floating on the surface. “That was one of the most tragic incidents,” Vera recalled. “The toughest part was going to see his family at 2 or 3 in the morning.”

Safety, Vera, says is number one to him, which is why he and the union local he leads have been constant supporters of PhilaPOSH, contributing time, resources, and finances. “They do so much for our community, for our families and for people like myself,” Vera said.

Vera says he and his members regularly turn to PhilaPOSH when someone is injured on the job. “Most working folks are living paycheck to paycheck,” he said, so they appreciate the advice they get from PhilaPOSH along with help navigating the state’s complicated workers’ compensation system.

“PhilaPOSH is great when it comes to that,” he said.

In turn, PhilaPOSH appreciates the support from Vera and Laborers’ Local 57.

“I can call and ask them for advice, for help, support, and they never say no,” said Nicole Fuller, PhilaPOSH’s executive director. “In addition to monetary support, they always have a member on our board, and it’s an active member. They don’t just sit on the board. They actively participate.”

Fuller said Vera and his members assist with safety trainings and, very importantly, help PhilaPOSH reach workers in the community – union or not – who need to learn how to avoid injuries on the job.

Of course, the best approach is to not be injured at work, and that means making sure safety is a priority on the job site.

Vera says he and his fellow union officers tell their members: “If you are on the job and about to do something that feels unsafe, stop and call.” He said his members do not hesitate to reach out to the union.

For Laborers, like all construction workers, the potential for catastrophe is everywhere. Laborers, including those who move freight, tend to be among the workers most often injured on the job, according to the most recent report from the U.S Labor Department’s Bureau of Labor Statistics (BLS). Nearly half of all workers who die on the job work in construction, transportation, and material-moving occupations – the exact work handled by members of Vera’s union.

Laborers often work in trenches, which, if not properly shored, can collapse, burying workers alive. Falls, like the one that led to Johnson’s death, are not unusual. Construction equipment on the move – from trucks, to backhoes, to forklifts – can strike workers on the ground. Vera remembers another member who was killed when a truck backed up over him on a construction site.

Safety starts, Vera said, with making sure that workers have the proper protective gear. Are they wearing their safety goggles, ear protectors, and gloves? The union wants job sites to include a safety manager – someone who constantly checks for hazards and makes sure workers are properly equipped. Frequent safety training also helps.

Vera, 44, grew up in North Philadelphia. His parents moved here from Puerto Rico when they were in their teens. “My father instilled in me the value of hard work and the appreciation of being a citizen of this country,” Vera said.

After graduating from high school, Vera joined the Army. When he came back to Philadelphia, he got work in construction and joined the union. “The best feeling about being a Laborer is when you are out riding with your family and you can point to a project and say, ‘I was responsible in helping construct that,’” Vera said

Vera has bragging rights to his share of Heavy and Highway projects, but what personally fills him with pride lies out of sight below Fairmount Avenue. As a member of the rank and file, Vera helped replace a sewer main there. “It was the biggest sewer pipe I had ever seen,” he said. The job involved working in deep trenches and dealing with the possibility of any hazard. “There was a huge amount of pressure.”

Vera, who rose through the union ranks and is also active in his community, often passes that Fairmount Avenue spot traveling home to his family in Roxborough.  Like most commuters, he regularly encounters traffic jams – some of which, particularly in the summer, relate to construction work.

“When most people complain, `Look at this traffic jam,’ I get happy our members are working” safely, he said. “Traffic is dangerous to workers. People are flying by. That’s why I don’t complain when I’m sitting in traffic. Slower is safer.”

Has PhilaPOSH helped you, your family, or your co-workers? Reach out.